Preserving a Sense of Place

The Committee’s Award for Preserving a Sense of Place commends the owners for retaining the original historic public view with its crossing-gable silhouette, as well as the 1930’s addition to the north, while recladding the structure with new materials, windows and a new front porch with an Arts and Crafts front door.  The new wing extends from the rear on this challenging site, with a garage addition to the south.

Park Street, one of the oldest streets in New Canaan, was laid out in 1738 to connect Old Stamford Road with the Congregational Church. The Queen Anne style residence was built by Irving Lockwood in 1885 on land acquired from Stanley Lockwood, proprietor of a meat and vegetable market in town. Irving Lockwood was a prototypical entrepreneur. He bought out his brother’s livery business and purchased land near the railroad tracks for his office and stables. He then expanded to coal, wood, lumber and sand and road materials, forerunner of New Canaan Fuel and Lumber Company.  He owned a 650-acre farm in Southbury where he raised over one hundred head of cattle; a 150-acre farm on West Road, near the Lockwood homestead where he was born, raised pigs and cattle on another farm on Norwalk Road, and owned woodlands in different parts of Town.  In 1895 he built a fashionable and more elaborate Queen Anne style house with turret on Main St. where he, his wife, two daughters and a Polish maid were living in 1910. By the time of his untimely death from diabetes complications in 1919, he was living on South Avenue. 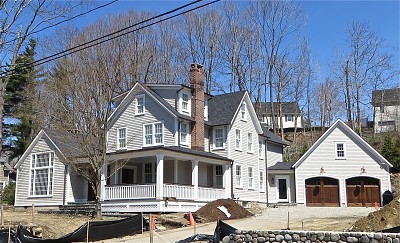