“The Committee’s Award for Preserving a Sense of Place” credits the owner for retaining the original gabled front and the shape of the house after 1970’s alterations, while creating a rear addition with modern materials. Here the multiple original outbuildings, especially the 1850’s barn, add to the sense of history of this picturesque corner.

Built in 1897 by Albert Romain on the foundations of the 1850 Darius Fancher house at the important “Smith Ridge” intersection of North Wilton Road (leading to Wilton and Danbury), the road west to Lockwood’s Mill and upper white Oak Shade (Oenoke Ridge) to NY State, and south to Norwalk.  Built in a simple Queen Anne style, it changed hands five times in the next ten years until Joseph Lockwood bought in in 1907. Then he sold it in 1921 to Edwin and Caroline Bouton who lived in and ran Extown Farm on Laurel  Road, as the Town’s Poor Farm. Two years later the Town Farm was closed and the Boutons moved to North Wilton Road. Their son Edwin, inherited the house, served as the Town’s “Superintendent of the Mails,” and lived there until 1966. 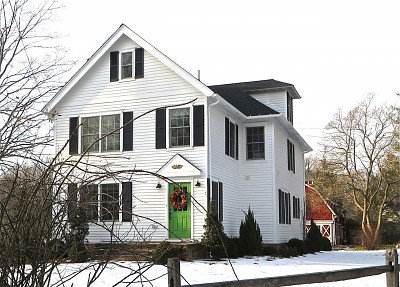