This Award recognizes the PRESERVATION and REHABILITATION of a Commercial building.

Since 1980 the owner of this shop building has rehabilitated the interior and restored much of the exterior to its original appearance, although the two storefronts evolved: small arched show windows flanked a wide central door in the “meat market” 1889;  side-by-side entry doors in the middle, flanked by large bay windows in 1901 continued until 1980.

Seen on the 1878 Pictorial Map of New Canaan, this 1-story structure housed two store fronts until 1950 when the Hilbert Brothers moved from across the street and bought it for their antiques business, keeping the two store fronts. In 1980, the decorator Jane Perrin and the architect Mike Sharp moved in.  With the architect, Dean Telfer, they restored the cut shingles and elaborate brackets of the Queen Anne style, retained the original tin ceilings, and designed a single entrance door. The current second door was recently installed to grant direct access to the basement. 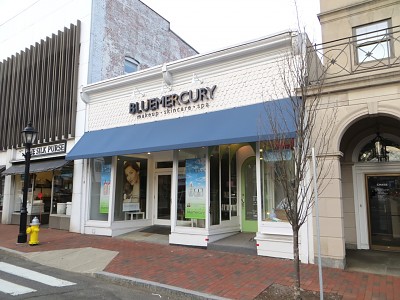