The Hyatt-Byard-Gates Moore House in Silvermine was adapted for modern living, while preserving original surfaces where possible, by the architect-contractor Richard Chipley, AIA.  As part of a prior addition in the 1920’s, the pre-eminent antiquarian John Kenneth Byard had installed beautiful period rooms, while, at the same time, he was converting an old cotton mill into the Silvermine Tavern.

Unusual valor was required to bring the house back to life, as it suffered a devastating fire during the final stages of decorating and the owners were  advised to demolish it.  The Hildebrands and their architect were determined to proceed and, with only the addition of a new door on River Road, the house retains the original exterior appearance it has had for almost 100 years. 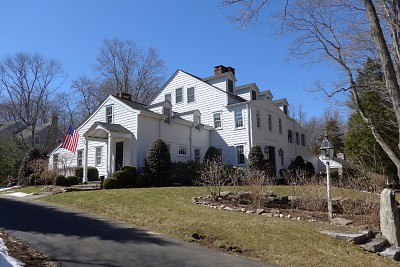