It indicates the original 1913 building with the 1936 addition.   As shown, there is approximately 100 feet between between the new and original library building.  That's more than three times the current setback requirements in New Canaan. 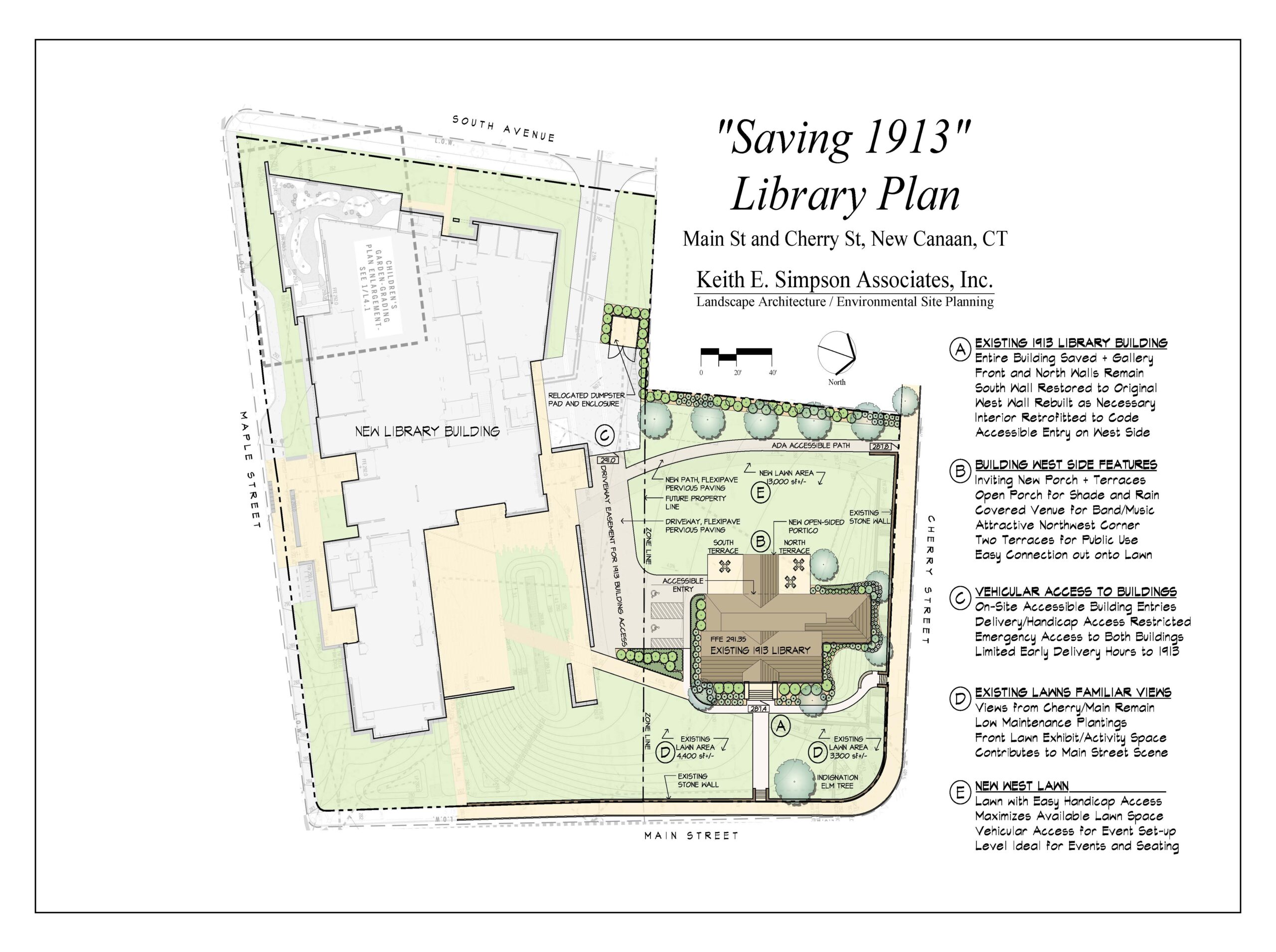 Here is Keith Simpson's description of his site plan recommendation: 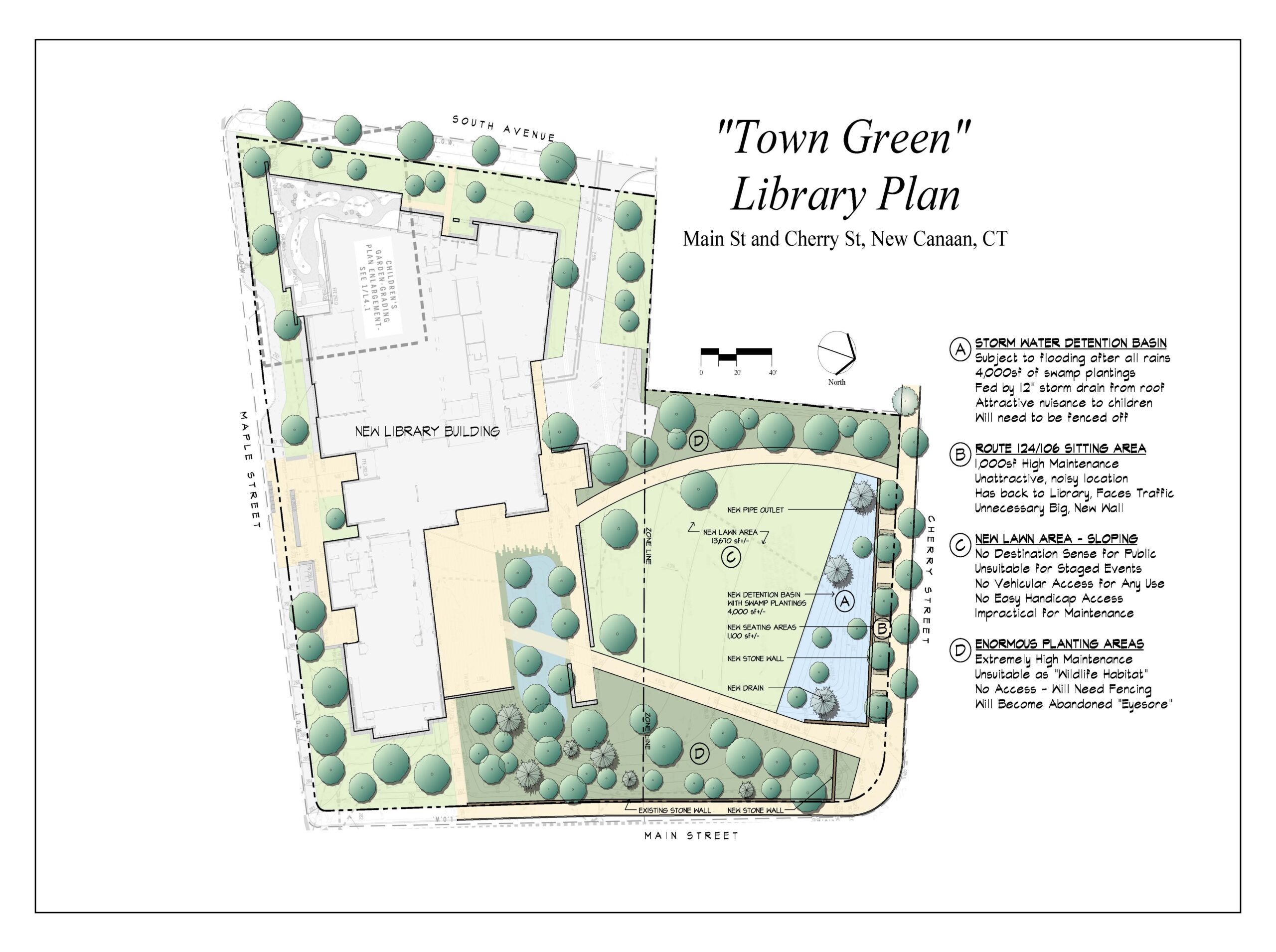 On the NORTH SIDE of the “Town Green,” almost one quarter of what looks like grass in the architectural illustrations, is a swampy detention basin fed by a 12 inch pipe, just 8 feet from the edge of  the “Town Green,” bringing large quantities of roof drainage water right to the “Town Green” area.  This regularly flooding area, complete with standing water and plants like Tussock Sedge, with its wetland cousins, was described by the architect as a “landscape feature”, but it is a feature which belongs, more appropriately, in the outer reaches of the Nature Center’s wetlands. Representing it as being part of the Town Green and implying that it is useable lawn is highly misleading and irresponsible. It would be a man-made wetland and with its standing water, it will become prime territory for frogs and West Nile Virus mosquitoes and become an attractive nuisance and end up being required to be fenced off. See the September 23, 2019 memorandum from the New Canaan Department of Health regarding West Nile Virus.

Also, on the north side of the “Town Green” along Routes 124 and 106, a high maintenance, undesirable, and hugely expensive, new sitting area is being proposed. No one will want to sit there looking at backed-up traffic at the Cherry Street and Main Street light. The town will end up maintaining it for a while and then, in all probability, tearing it out.

On its WEST SIDE, there is a fully landscaped area, so dense that it precludes even a decent-sized lawn mower from being driven onto the big lawn from the nearby library service area, let alone a vehicle to put up a tent or drop off seating for a concert or a stage.

On its EAST SIDE, along Main Street, there is a new, even larger, landscaped area, described by the architects as a future “Wildlife Area”. It seems that this has been deliberately positioned, on top of the footprint of the 1913 building, and its front lawn areas. This area will rapidly become overgrown and unkempt in a prime, historic location right on Main Street. It is proposed solely for the purpose of taking the 1913 building “out of the view” of the new library building as the chairman of the library trustees has described it. There are so many trees and shrubs planned for the area that, when they are in leaf, even the new library building itself will barely be visible from Main Street. That area will turn into a much greater “eyesore” than the 1913 building, which the library chairman claims 1913 is today.

On its SOUTH SIDE, the easy flow of people moving between the new library building, and its new “Green” is heavily, and unnecessarily, encumbered by a 60’ long wall and yet another mosquito-breeding swamp type detention area right next to the new library itself.

The actual LAWN AREA  is sloping down towards its swampy detention basin, and it is configured in such a manner, both vertically and horizontally, that it is unsuitable for the many “staged events” suggested for it. As currently designed, there is no vehicular access route onto the “Town Green” from anywhere. Three oaks which would develop into extremely large trees are proposed for the lawn area and they would further hinder its use for events. It has repeatedly been characterized as a destination for the “Summer Theater”. It is completely unsuitable for that, for numerous reasons.

In summary, all along, the “Town Green” concept has long been glamorized, and over-marketed, as a desirable alternative to the 1913 building. In fact, it turns out to be a contorted plan specifically fabricated for the purpose of justifying removal of 1913 from its present location. It is dysfunctional, much smaller than described, inaccessible, with unhealthy, above ground, storm water detention systems, with standing water, right in the center of town, and within a few feet of a proposed “Town Green” and the new library building itself. Such site planning is the height of irresponsibility.